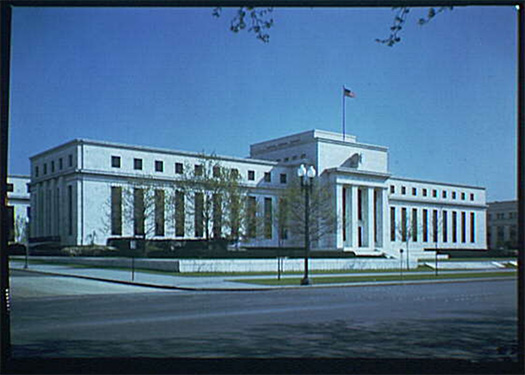 Under the terms of the first major banking reform to follow the Civil War, the Federal Reserve System, or “Fed,” was designed to keep the economy healthy through the formulation of U.S. monetary policy. As the nation’s money manager and central banking authority, the Fed has regulatory and supervisory responsibilities and ensures that sufficient amounts of currency and coin circulate to meet the public’s demand. It also establishes interest rates and monitors the availability of money and credit:

All national banks chartered by the federal government are required to join the Federal Reserve System; to subscribe to capital stock in the Federal Reserve Bank in an amount equal to six percent of its combined capital and surplus; to invest three percent (as a reserve requirement) of their holdings in the system; and to hold another three percent subject to call: These stipulations enabled the Fed to curtail the money and credit flow problems characteristic of the late 1800s and early 1900s and to respond to many of the demands of the growing economy. Nonetheless, the early Federal Reserve System proved fallible. After the Great Depression and again after the inflation and disinflation crises of the 1970s and 1980s, the role of the Federal Reserve was reexamined and overhauled to meet new needs. New banking acts were passed and the banking industry underwent reforms. This process continues today as the actions of the Fed profoundly impact the national and global economy: