#AceHistoryReport – Dec.23: Although the British had recognized American independence with the signing of the Treaty of Paris on September 3, British troops did not evacuate New York until December 4. After the last British ships left the harbor, Washington bid an emotional farewell to his officers and set out for Annapolis. On the journey south he was met with throngs of well-wishers paying him tribute for his role in the nation’s military victory over Great Britain:

Today in History – December 23: George Washington Resigned his commission as commander in chief of the Continental Army in the sentate chamber of Maryland Washington left Annapolis at dawn on December 24 and set out for Mount Vernon, his plantation on the Potomac River in Virginia. He arrived home before nightfall on Christmas Eve, a private citizen for the first time in almost nine years. 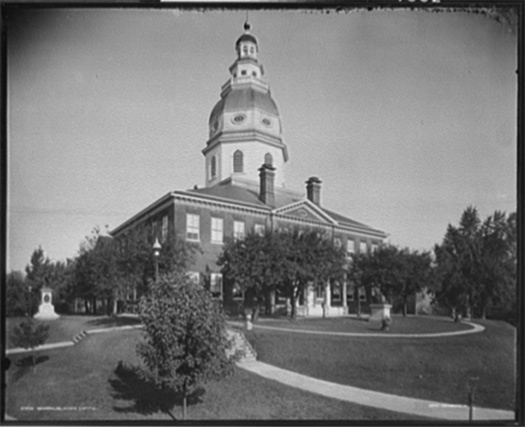 When Washington visited the Maryland State House in 1783, the structure was incomplete and suffered from a leaking roof. By 1786, when the Annapolis Convention was held at the State House to address defects in the Articles of Confederation, construction of a new dome had begun. Today, the building begun in 1772 is the oldest state house still in legislative use:

Located at the mouth of the Severn River on the Chesapeake Bay, Annapolis was settled as Providence in 1649 by Puritans who moved there from Virginia. The town was also known in the seventeenth century as Town of Proctor’s, Town at the Severn, and Anne Arundel Town. In 1694, the colonial capital of Maryland was moved there from St. Mary’s City and it was renamed Annapolis in honor of Princess (later Queen) Anne of England. It is home to the U.S. Naval Academy and to St. John’s College, founded in 1696 as King William’s School: