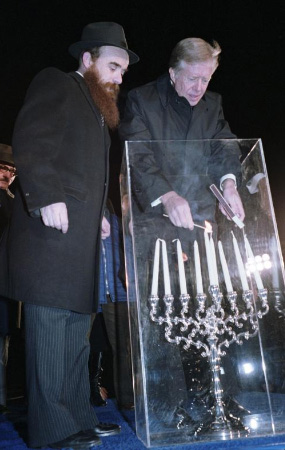 In his Hanukkah remarks, President Carter tied the Jewish wintertime holiday to the triumph of religious freedom over adversity:

It’s a real honor for me to come from the White House here to this ceremony celebrating the commencement of Chanukah, last night, the Feast of Lights…

As many of you know, the season of Chanukah commemorates the victory of religious freedom. At the commencement of the celebration of this annual event, this season of thanksgiving and closeness to God, there was a miracle within which the candle which was supposed to only burn a short time burned for 8 days and nights…

“Chanukah Remarks at the Lighting of the National Menorah.” Jimmy Carter, 39th President of the United States, December 17, 1979. The American Presidency Project.

This first menorah lighting ceremony included not only the lighting of wax candles in a 36″ sterling silver menorah, but also the lighting of electric “flames” in a 36 foot gold-painted stainless steel menorah that had been under construction for several years. The National Menorah remained in Lafayette Square until 1987 when it was moved to its current location on the Ellipse. The President or a representative of the Administration participates in the lighting of the Menorah each year.

The Hanukkah (Chanukah) holiday, which is celebrated over eight days, commemorates the rededication of the Second Temple of Jerusalem in 165 BCE, after the Jews, led by Judas Maccabeus, freed themselves from the oppressive regime of Antiochus IV, the Seleucid king, who had desecrated the Temple: Following the Jewish lunar calendar, the start of the celebration varies from year to year. Also known as the Festival of Lights, Hanukkah recalls the Talmudic story of the Temple’s one-day supply of oil miraculously burning for eight days: 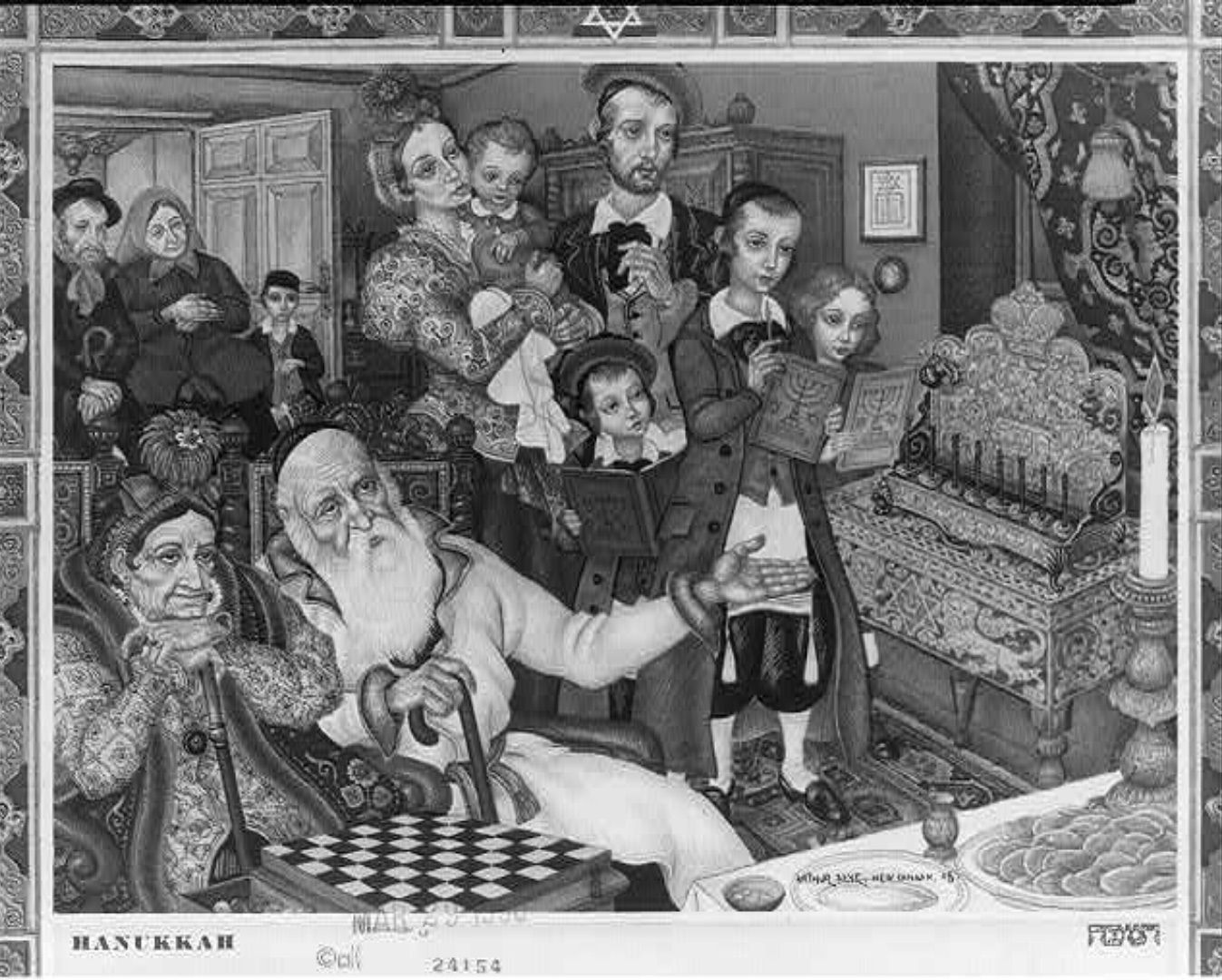 Hanukkah is celebrated primarily in the home rather than the synagogue, often along with the evening meal, often in the company of friends as well as family: Foods fried in oil such as potato latkes (pancakes) and jelly doughnuts, and games such as dreidel (a four-sided top), are associated with Hanukkah celebrations. In the United States, especially, it has become customary to exchange gifts and children often receive one small gift for each night of the celebration:

The Hebraic Section of the Library of Congress has long been recognized as one of the world’s foremost centers for the study of Hebrew and Yiddish materials. Established in 1914 as part of the Division of Semitica and Oriental Literature, it grew from Jacob H. Schiff’s 1912 gift of nearly 10,000 books and pamphlets from the private collection of a well-known bibliographer and bookseller Ephraim Deinard. The section houses works in Hebrew, Yiddish, Ladino, Judeo-Persian, Judeo-Arabic, Aramaic, Syriac, Coptic, and Amharic. Holdings are especially strong in the areas of the Bible and rabbinics, liturgy, responsa, Jewish history, and Hebrew language and literature: