#AceHistoryReport – Sept.11: The hopes and dreams of millions of Chileans were drowned in blood by a United States-backed military overthrow of Santiago’s elected left-wing president, Salvador Allende: ​Allende, a Marxist who helped found the Chilean Socialist Party, stood in numerous elections as a candidate for Popular Unity (PU) – an alliance of socialists, the Communist Party, and other left-wing organisations: His platform was developed amid a backstop of political polarisation and widespread working-class discontent. By 1970, the country had become embroiled in thousands of strikes and land seizures, involving hundreds of thousands of people:

Waiting for Spring: The 1973 Chilean Coup and a Lesson for the Left

The Christian Democrat (CD) reformist president, Eduardo Nicanor Frei Montalva, who won the 1963 election by pitching himself to the middle classes as the only alternative to Marxism, had promised to end the economic problems that plagued the country, including stagnation and widespread unemployment. He also offered to “Chileanize” the economy by taking the US-owned copper firms into national ownership.

Very little changed, however, and popular pressure pushing the representatives of Chilean capital to the left led to a slim victory for Allende in the 1970 election, with 37 percent of the vote, forcing his left-wing alliance to rely on support from the Christian Democrats.

As a precondition for his ascension to office, the CD party demanded Allende sign a “Statute of Guarantees”, preventing him from making any sweeping changes to the state, the legal system, and, fatally, the armed forces.

Despite the structural handicaps of an uneasy coalition and an inherited and decrepit economy, the PU government did embark on sweeping reforms.

The Allende government quickly nationalised the US-dominated copper industry, which accounted for three-quarters of the country’s exports. He brought banking and the financial sector into public ownership, as well as 91 other industries, in his first year alone. The PU also embarked on diversification projects to unlink the economy from its reliance on copper, one of which included an embryonic version of the internet.

Project Cybersyn; Chilean project from 1971–73 during the presidency of Allende aimed at constructing a distributed decision support system to aid in the management of the national economy. pic.twitter.com/2TVPRCcCRu

​This experiment in democratic socialism looked to use its limited powers to restructure the economy and provide a more equal distribution of national resources – policies which received massive support from the working class and poor but scorn from the middle and wealthy classes, who hitherto had been the primary beneficiaries of state policy.

Allende oversaw an economic boom in his first year. He succeeded in reducing unemployment, improving income equality, an average increase in real wages of 22%, and reduced inflation from 33% to 19%. In a reflection of their popularity, the 1971 municipal elections saw the PU received 50% of the vote.

Despite the achievements, hyperinflation soon returned, and in 1972, the Chilean Escudo became next to worthless. In an attempt to address the problem, Allende sought to introduce anti-inflationary policies through tax increases on the wealthy but was blocked by an opposition-dominated congress.

The problem was not purely home grown. In Washington, the administration of US President Richard Nixon, and his key foreign policy advisor, Henry Kissinger, had never truly accepted the election of an overtly Marxist president and rejected the government’s legitimacy.

“I don’t see why we have to let a country go Marxist just because its people are irresponsible” – Henry Kissinger, Nixon’s Secretary of State.

The imperialists tried to prevent him from taking office, even killing a general to help foment a coup before Allende was sworn in. During his time in office, they tried to overthrow him every single day. The military – under Pinochet – was given authority to take him out. pic.twitter.com/8HzpWezT9x

​​As part of its Cold War strategy against the Soviet Union, the United States had pursued a policy of attempting to sabotage the Allende government. Throughout 1972 and 1973, the Central Intelligence Agency funneled money to labour organisations and trade unions to take strike action and harm the economy.

According to sources in the New York Times, the CIA gave direct subsidies to shopkeepers, taxi drivers, and others which led to widespread disruption. In a kind of middle-class general strike, 250,000 truck drivers and other professionals created an economic downturn that set the foundations for the eventual coup.

In 1970, in an effort to “prevent Allende from coming to power or to unseat him”, President Nixon ordered the CIA to “make the economy scream”, and scream it did.

That same year, two military officers supplied by the United States intelligence services assassinated General René Schneider in a botched kidnapping after the nationalist Commander-in-Chief of the Chilean military rejected the idea of preventing Allende from taking office through military force.

How the @nytimes and @TheEconomist covered what we now know was a military coup against Allende in Chile in 1973.

However, despite the internal and external crippling of the economy through intentional sabotage by the government’s enemies, Allende increased his share of the vote to 44% in the March 1973 election.

While he was unable to reform the military, one of Allende’s final moves was bringing two generals into his own cabinet after losing the support of the CD.

The Chicago Coup & After Allende

The London based newspaper ‘the Socialist Worker’ predicted at the time that the same military that had repressed striking workers “would not sit by and let the ruling class be voted out of existence”.

On 11 September 1973, ­General Augusto Pinochet and the military, supported by the US and using fighter jets purchased from the United Kingdom, besieged the presidential palace.

Before taking his own life, President Allende issued a final address to the Chilean working class.

“Other men will overcome this dark and bitter moment when treason seeks to prevail. Keep in mind that, much sooner than later, the great avenues will again be opened through which will pass free men to construct a better society. Long live Chile!”

Salvador #Allende, the elected socialist president of #Chile makes his final speech hours before his death, #OnThisDay in 1973.
His government was brutally overthrown in military coup. Thousands more socialists were murdered as a fascist junta led by Augusto Pinochet took power. pic.twitter.com/fosTim7N2C

​Following his overthrow, civilian rule ended and a military dictatorship was established. During General Pinochet’s nearly-3 decade rule, 30,000 people were murdered and thousands more were tortured and imprisoned in concentration camps.

The economic gains were also reversed. The junta invited Milton Friedman’s ‘Chicago Boys’ to serve as economic advisors and, freed from the shackles of democratic accountability, implemented a neoliberal experiment of privatisation and deregulation.

September 11th in Chile is always one of the toughest days of the year.

The Estadio Nacional was used as a concentration camp. pic.twitter.com/VnZfWaDuV7

​After just ten years of free-market policies, unemployment reached 22%, real wages declined by 40%, and productivity dropped. By the end of Pinochet’s rule in 1990, Chile had reached a 45% poverty rate.

Despite the Pinochet regime being overthrown by popular pressure and democracy eventually restored, many of the military government’s policies became enshrined in the countrie’s constitution, outlawing any serious attempt to reassert the state sector over the economy and leading to the outburst of discontent seen in Chile today. 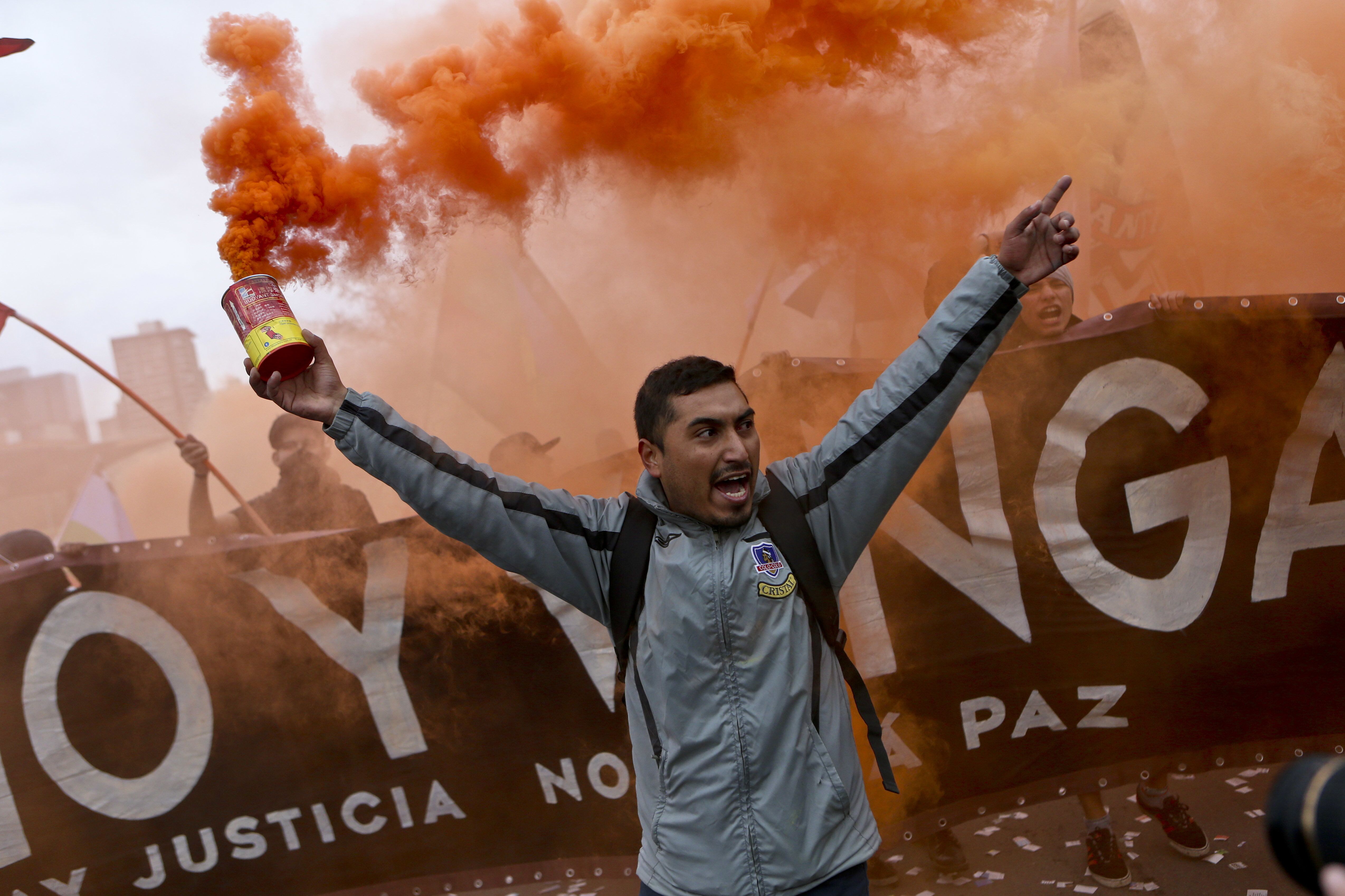 A man takes part in a demonstration commemorating the 44nd anniversary of Chile’s 1973 military coup, in Santiago, Chile, Sunday, Sept. 10, 2017.

Lessons for the Left

Pablo Neruda, a poet and personal friend of President Allende, who was likely murdered by the Pinochet regime, wrote: “You can cut all the flowers but you cannot keep Spring from coming”.

The Chilean experience is not unique. From Mossadegh in Iran, the overthrow of President Sukarno in Indonesia, the toppling of Jacob Árbenz in Guatemala on behalf of United Fruit, the removal of democratically elected governments to protect United States corporate interests has become a historical cliche.

The same tactics of economic strangulation are being employed today by the Trump Administration and its sanctions against the elected Maduro government in Venezuela. 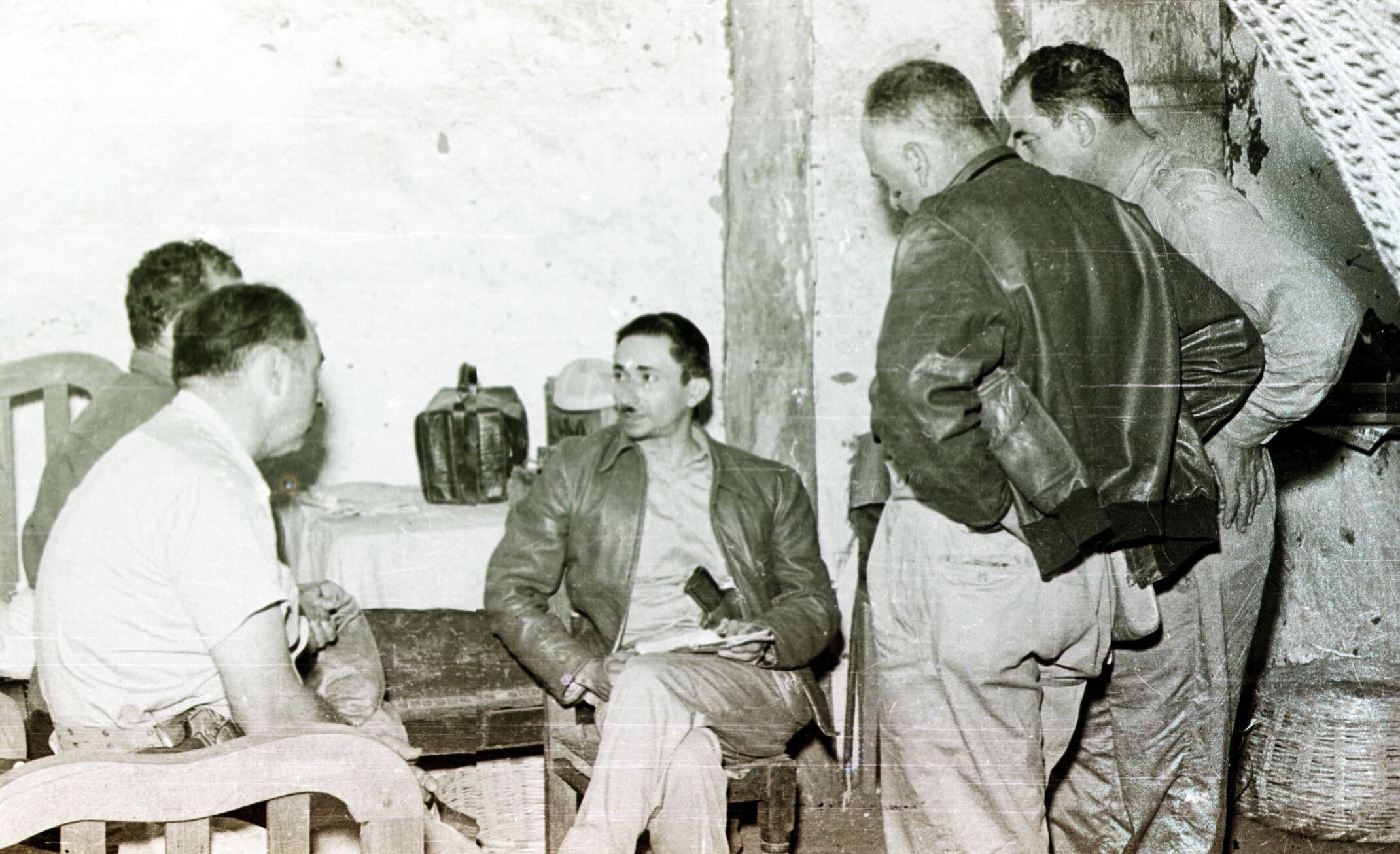 This 1954 file photo shows Guatemalan Col. Castillo Armas (C) surrounded by supporters days before Armas led a coup that deposed President Jacobo Arbenz. Armas assumed the presidency 01 September and would be assassinated while in office 26 July 1957

A question is raised, however, of how does one maneuver an opposition that has no intention of playing by the rules? Even in developed first-world democracies those who propose a radical redistribution of wealth are structurally crippled.

Recent examples include the US Democratic Party rallying to stop Bernie Sanders from being the 2020 presidential nominee. In the UK, leaked internal documents indicate that the Labour Party was actively working against its own election victory to prevent Jeremy Corbyn from becoming prime minister. This came amid active threats from the Trump Administration that the US would cease information sharing with the UK if a left-wing government was elected.

Following the 1917 Russian revolution, the introduction of ‘War Communism’ saved the fledgling socialist state from being overthrown by the White Army and the invasion coalition which including the United States and the British Empire.

Much criticism is made of the heavy-handedness of the Actually Existing Socialist movements that secured power in Russia, China, Cuba, and other countries throughout the 20th century but without exception, these revolutions had been subject to constant sabotage, blockade, and subversion, just like in Chile.

It’s not sufficient for a revolution just to win power. If it is to survive, it needs to be actively defended. This is the lesson the left needs to take on board. Lenin knew his palace was about to be besieged, while Allende invited the generals inside.

There’s a reason why every progressive on earth knows the name ‘Augusto Pinochet’ and almost no one has heard of Admiral Kolchak.