#AceHistoryReport – Dec.18: Dickens, whose love for the seasonal bird came through in books such as A Christmas Carol, was sent the turkey in Christmas week of 1869 by the manager of his reading tours, George Dolby: Dickens was often given a turkey as a Christmas present; according to Dolby’s memoirs, this particular bird weighed 30lb. The festive package took wing from Ross-on-Wye in good time to reach the author on Christmas Eve, but Dickens sent an urgent message to Dolby that day: “WHERE IS THAT TURKEY? IT HAS NOT ARRIVED!!!!!!!!!!!”

The turkey had been moved, along with other parcels, to a horse-box carriage in Gloucester, which had subsequently caught fire. The charred remains were later offered to the people of Reading, for sixpence a portion: According to Dolby, Dickens was initially annoyed, but later saw it as a blessing that what was left of the bird had not been wasted, said Anne McLean, an archive volunteer at the museum. 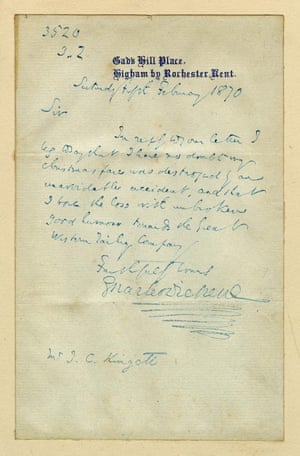 The letter from Dickens to James Charles Kingett of the Great Western Railway, written in February 1870. Photograph: National Railway Museum

The Great Western Railway company, via superintendent James Charles Kingett of the Up Parcels Department at Paddington station in London apologised to Dickens: The author replied in February 1870 that “I have no doubt my Christmas fare was destroyed by an unavoidable accident, and that I bore the loss with unbroken good humour towards the Great Western Railway Company”.

This was Dickens’s last Christmas, as he died in June 1870:

Dickens’s reply had been printed on Kingett’s retirement in 1908 in the Great Western Railway magazine, but had been forgotten in the museum’s 3km of archive shelving, which spans 200 years: It was found during a reappraisal of the collection, and is now on display.

Lead curator Ed Bartholomew called the letter a hidden gem: “The bleak irony of this discovery is that the man who did so much to shape our Christmas experiences may himself have been left with an empty stomach on his last ever Christmas day……………….Hard times indeed,” he said.

“Is it likely that Dickens was able to get a replacement turkey in time for his Christmas dinner?” asked McLean. “We know from A Christmas Carol that it was possible to buy one on Christmas morning, as Mr Scrooge did for the Cratchit family, but the great Dickens might have had to make do with a humble goose.”