#AceHistoryReport – Nov.23: The discovery raises new questions about the influence of Islam in Scandinavia, writes journalist Tharik Hussain: They were kept in storage for more than 100 years, dismissed as typical examples of Viking Age funeral clothes: But a new investigation into the garments – found in 9th and 10th Century graves – has thrown up groundbreaking insights into contact between the Viking and Muslim worlds: Patterns woven with silk and silver thread have been found to spell the words “Allah” and “Ali”. 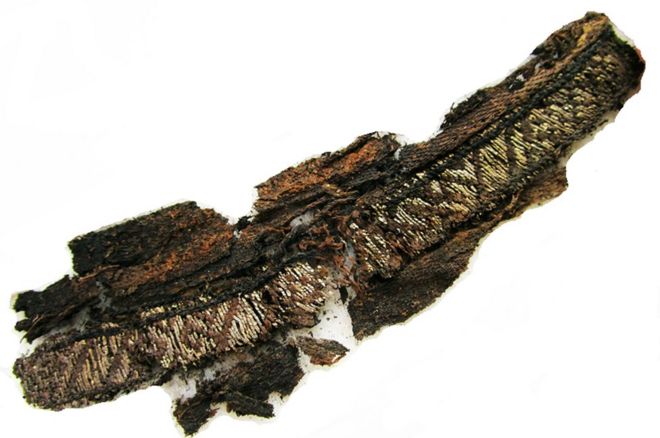 One of the excavated fragments made from fine silk and silver thread discovered at the two Swedish sites, Birka and Gamla Uppsala

The breakthrough was made by textile archaeologist Annika Larsson of Uppsala University while re-examining the remnants of burial costumes from male and female boat and chamber graves originally excavated in Birka and Gamla Uppsala in Sweden in the late 19th and mid-20th centuries: She became interested in the forgotten fragments after realising the material had come from central Asia, Persia and China: Larsson says the tiny geometric designs – no more than 1.5cm (0.6in) high – resembled nothing she had come across in Scandinavia before: “I couldn’t quite make sense of them and then I remembered where I had seen similar designs – in Spain, on Moorish textiles.”

Larsson then realised she was not looking at Viking patterns at all but ancient Arabic Kufic script: There were two words that kept recurring. One of them she identified with the help of an Iranian colleague. It was the name “Ali” – the fourth caliph of Islam: But the word next to Ali was more difficult to decipher.