Selene is the Greek Goddess of the Moon. She is the daughter of the Titans Hyperion and Theia.

Besides, Selene is sister of the Sun-God Helios, and Eos, Goddess of the Dawn.

Just as Helios, from his identification with Apollo, is called Phoebus (“bright”), Selene, from her identification with Artemis, is also commonly referred to by the epithet Phoebe (feminine from the name is of Greek origin, it is likely connected to the word selas (σέλας), meaning “light”.

Both Selene and Artemis were also associated with Hecate, and all three were regarded as Lunar Goddesses, although only Selene was regarded as the personification…

The boy king’s face as revealed by the ‘virtual autopsy’.

But in the flesh, King Tut had buck teeth, a club foot and girlish hips, according to the most detailed examination ever of the ancient Egyptian pharaoh’s remains.

And rather than being a boy king with a love of chariot racing, Tut relied on walking sticks to get around during his rule in the 14th century BC, researchers said.

A ‘virtual autopsy’, composed of more than 2,000 computer scans, was carried out in tandem with a genetic analysis of Tutankhamun’s family, which supports evidence that his parents were brother and sister.

The scientists believe that this left him with physical impairments triggered by hormonal imbalances. And his family history could also have led to his premature death in his late teens.

Various myths suggest he was murdered or was involved in a chariot crash after fractures were found in his skull and other parts of his skeleton.

Now scientists believe he may have died of an inherited illness because only one of the breaks occurred before he died, while his club foot would have made chariot racing impossible.

In 1907, Lord Carnarvon George Herbert asked English archaeologist and Egyptologist Howard Carter to supervise excavations in the Valley of the Kings. 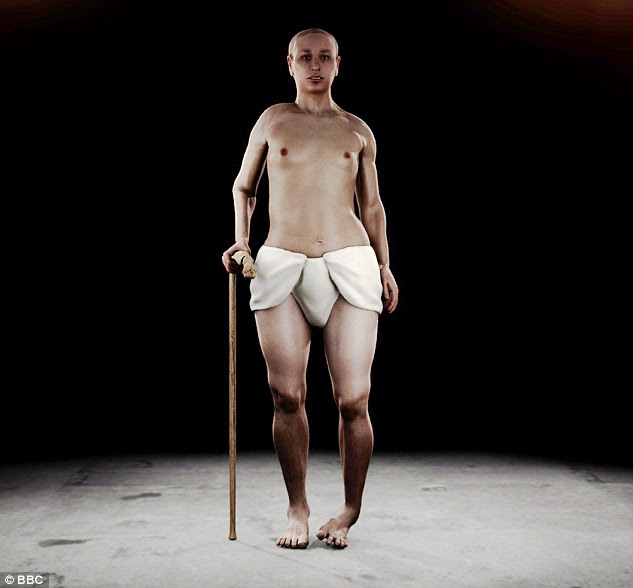 Tutankhamun (illustrated) was reliant on a walking stick thanks to his club foot, which may have been due to the fact that his parents were brother and sister.

They opened the burial chamber and discovered the the sarcophagus in February the following year.

The revelations are made in BBC One documentary Tutankhamun: The Truth Uncovered.

Albert Zink, from the Institute for Mummies and the Iceman in Italy, deciphered the truth about the ruler’s parents by studying the royal family’s DNA.

He found that Tut was born after his father Akhenaten, dubbed the heretic king, had a relationship with his sister. Incest was not frowned upon by the ancient Egyptians and they did not know about the health implications for any offspring.

Hutan Ashrafian, a lecturer in surgery at Imperial College London, said that several members of the family appeared to have suffered from ailments which can be explained by hormonal imbalances. He said: ‘A lot of his family predecessors lived to a ripe old age. Only his immediate line were dying early, and they were dying earlier each generation.’

Egyptian radiologist Ashraf Selim: ‘The virtual autopsy shows the toes are divergent, in layman’s terms it’s club foot. He would have been heavily limping.

‘There is only one site where we can say a fracture happened before he died and that is the knee.’

Evidence of King Tut’s physical limitations were also backed up by 130 used walking canes found in his tomb. 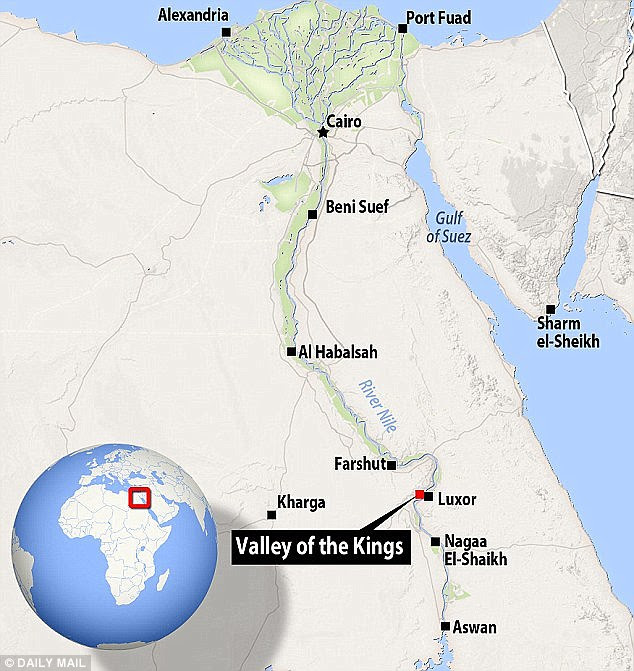 King Tutankhamun’s tomb was found in the Valley of the Kings, a valley in Egypt where pharoahs and nobles from the 18th, 19th and 20th dynasties (known as the ‘New Kingdom’) in Ancient Egypt were buried from the 16th to 11th century BC (marked). 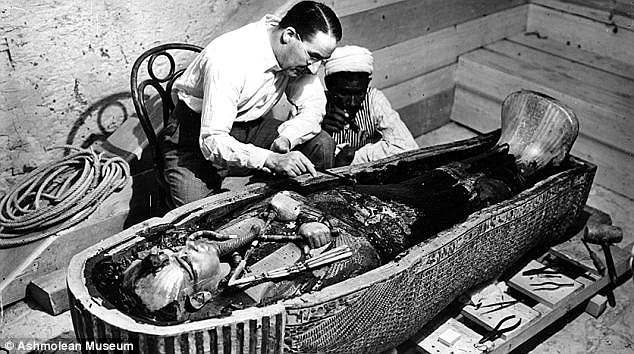 In November 1922, Howard Carter found steps that led to Tutankhamun’s tomb. He spent several months cataloguing the antechamber before opening the burial chamber and discovering the sarcophagus in February the following year. Carter and an unnamed assistant are shown inspecting Tutankhamun’s inner-most coffin.

Presenter Dallas Campbell, said: ‘Trying to navigate through the intense speculation and politics that surround one of the most famous characters in history is both daunting and thrilling in equal measure.

‘Foolhardy perhaps! But using solid science and a truly multi-disciplinary approach we’ve finally been able to put to bed some of the myths and pre-conceived ideas that have surrounded his life and death, and hopefully add a new chapter that will ensure the Tutankhamun story continues to fascinate.’

Earlier this year, egyptologists from the American University in Cairo shed light on some of the bizarre burial rituals discovered in the tomb, including the fact the king’s penis was embalmed at a 90-degree angle, the only mummy to have ever been found with this feature.

On the outside of the tomb, decorations depicted Tutankhamun as underworld god Osiris, while wall paintings (pictured) showed the king being embraced by the underworld god. It is believed that if Tutankhamun was shown to be this powerful god it would quash a religious revolution taking place in the 1320s BC.

Earlier this year, egyptologists from the American University in Cairo shed light on some of the bizarre burial rituals discovered in the tomb, including the fact the king’s penis was embalmed at a 90-degree angle – the only mummy to have ever been found with this feature.

They claimed that this may have been carried out on purpose to make the king appear like Osiris, the god of the underworld, in an attempt to frighten religious revolutionaries.

At the time of his death in 1323 BC, the father of the teenage Egyptian king was said to be leading a religious revolution in the country.

It is believed Akhenaten wanted to destroy the belief in the Egyptian gods and instead worship a sun disc called the Aten.

Tutanhkhamun was trying to tackle this revolution when he was believed to have broken his leg and died from an infection in the wound. DNA analysis in 2010 also found traces of malaria in his system.

During mummification a decision was made to not only embalm the erect penis, but also to cover the king’s body in black liquid – similar in colour to the skin of Osiris – and remove his heart.

These rituals, according to Professor Salima Ikram from the university, were done in order to make people think Tutankhamun was the underworld god. 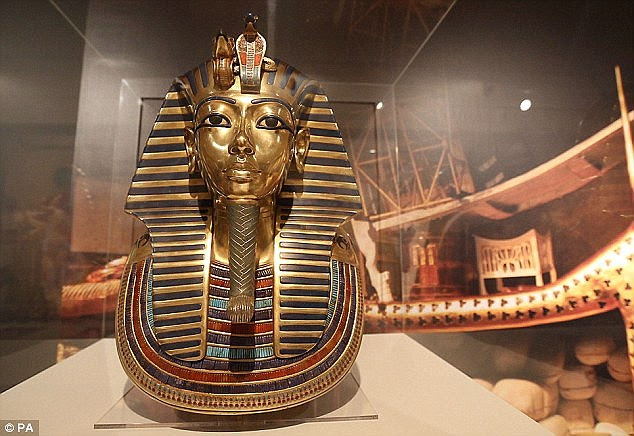 At the time of his death in 1323 BC, the father of the teenage Egyptian king was said to be leading a religious revolution in the country. Tutanhkhamun (replica pictured on display in Oxford) was trying to tackle this revolution when he was believed to have broken his leg and died from an infection in the wound. From her Wikipedia page: “Seventeen-year-old Jackie Mitchell, brought in to pitch in the first inning after the starting pitcher had given up a double and a single, faced Babe Ruth. After taking a ball, Ruth swung and missed at the next two pitches. Mitchell’s fourth pitch to Ruth was a called third strike. Babe Ruth glared and verbally abused the umpire before being led away by his teammates to sit to wait for another batting turn. The crowd roared for Jackie. Babe Ruth was quoted in a Chattanooga newspaper as having said:

“I don’t know what’s going to happen if they begin to let women in baseball. Of course, they will never make good. Why? Because they are too delicate. It would kill them to play ball every day.”

Next up was the Iron Horse Lou Gehrig, who swung through the first three pitches…

#AceHistory2ResearchNews – October 23 – The air was thin, the nights were cold, the sun could easily burn the skin.

But about 12,000 years ago, small groups of hunter-gatherers found a home very high up in the Peruvian Andes.

Now, their stone tools and other arti-facts have revealed their presence at about 14,700 feet above sea level, about as high as the Matterhorn and much higher than Machu Picchu.

They lived there nearly 1,000 years earlier than any other known human habitation anywhere above even 13,000 feet, researchers report.

#AceHistory2ResearchNews – GREECE – October 20 – The imposing mosaic unearthed in the burial mound complex at Amphipolis in northern Greece might contain the best-ever portrait of Alexander the Great as a young man, according to a new interpretation of the stunning artwork, which depicts the abduction of Persephone.

It might also confirm previous speculation that the tomb belongs to Olympias, the mother of Alexander the Great.

The mosaic portrays the soul-escorting Hermes, Hades (or Pluto, in Latin) and Persephone. In reality, the mosaic most likely has human counterparts represented in the guise of the three mythological characters, said Andrew Chugg, author of “The Quest for the Tomb of Alexander the Great.”

“I am thinking very much that Persephone should be an image of the occupant of the tomb being driven into the Underworld,” Chugg told Discovery News.

PLAY VIDEO at link below:
Discovering The ‘Cave Of Forgotten Dreams’
DCI

#AceHistory2ResearchNews – A team of Greek researchers has confirmed that bones found in a two-chambered royal tomb at Vergina, a town some 100 miles away from Amphipolis’s mysterious burial mound, indeed belong to the Macedonian King Philip II, Alexander the Great’s father.

Find out how this seemingly impossible task might have been accomplished.

The anthropological investigation examined 350 bones and fragments found in two larnakes, or caskets, of the tomb. It uncovered pathologies, activity markers and trauma that helped identify the tomb’s occupants.

Along with the cremated remains of Philip II, the burial, commonly known as Tomb II, also contained the bones of a woman warrior, possibly the daughter of the Skythian King Athea, Theodore Antikas, head of the Art-Anthropological research team of the Vergina excavation, told Discovery News.

The findings will be announced recently at the Archaeological Museum of Thessaloniki. Accompanied by 3,000 digital color photographs and supported by X-ray computed tomography, scanning electron microscopy, and X-ray fluorescence, the research aims to settle a decades-old debate over the cremated skeleton.

Scholars have argued over those bones ever since Greek archaeologist Manolis Andronikos discovered the tomb in 1977-78. He excavated a large mound — the Great Tumulus — at Vergina on the advice of the English classicist Nicholas Hammond.

Among the monuments found within the tumulus were three tombs. One, called Tomb I, had been looted, but contained a stunning wall painting of the Rape of Persephone, along with fragmentary human remains.

#AceHistory2ResearchNews – October 15 – David Greenglass, who served 10 years in prison for his role in the most explosive atomic spying case of the Cold War and gave testimony that sent his brother-in-law and sister, Julius and Ethel Rosenberg, to the electric chair in 1953, has died at 92.

Atomic bomb spy David Greenglass, whose false testimony sent his own sister and her husband to the electric chair, dies aged 92

Greenglass — who admitted decades later that he lied on the stand about his own sister — died in New York City on July 1, according to the Rosenbergs’ sons, Michael and Robert Meeropol.

After his release from prison in 1960, Greenglass lived under an assumed name in Queens, hoping to be forgotten for his part in a McCarthy-era cause celebre that is still furiously debated to this day.

A spokeswoman for the Meeropols, Amber Black, said the brothers were aware of their uncle’s death last summer but did not seek media attention and received no inquiries at the time.

The Rosenbergs were convicted in 1951 of conspiring to steal secrets about the atomic bomb for the Soviet Union and were executed at New York’s Sing Sing prison, insisting to the very end that they were innocent.

Greenglass, indicted as a co-conspirator, testified for the government that he had given the Rosenbergs research data obtained through his wartime job as an Army machinist at Los Alamos, New Mexico, headquarters of the top-secret Manhattan Project to build the atomic bomb.