#AceHistoryNews says a great post and well written,thanks for sharing. “Any Ones Life Shaped By Struggle ” has determination and drive to change the world and #NelsonMandela left his mark on all of us #RIP

David Whitehouse describes the political experiences and influences that shaped Nelson Mandela from the opening years of his engagement in the struggle. 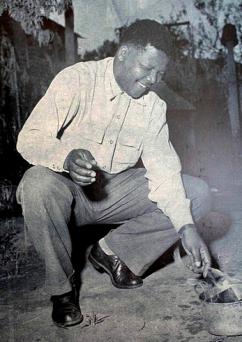 NELSON MANDELA’S life was long and full. His resistance to white supremacy began in the early 1940s–before “apartheid” even became the name of South Africa’s oppressive system–and continued in the 1990s through his term as the country’s first Black president.

To grasp his life’s significance, we have to come to grips with his life and his times. South Africa’s liberation struggle took place alongside–and in interaction with–dozens of African anti-colonial movements. The history of apartheid and the resistance movement also corresponded almost exactly to the period of the Cold War, a conflict that had major effects on South Africa and its region.

I will, however, narrow the focus to events inside South Africa that shaped Mandela’s early…